Over the Rainbow: LGBT2Q+ Seniors in the Lower Mainland

A new community response network for lesbian, gay, bisexual, trans, two-spirit, and queer/questioning seniors is launching in the Lower Mainland this month.

The Lower Mainland LGBT2Q+ Community Response Network aims to shine a light on issues faced by queer and trans seniors, and help them access resources for aging well.

“This launch event is exciting and affirming to those of us who have committed to this project,” says Neil Fernyhough, coordinator of the network. “Most of the stakeholders at the table are queer-identified, and we feel a special passion for ensuring the safety and well-being of members of our community—one which comes from our personal, lived experience.”

The launch of the network comes in the wake of a report issued by the federal government last year, “Social isolation of seniors – A focus on LGBTQ seniors in Canada.”

The report recognized that despite increasing acceptance of the LGBT2Q+ community in Canada, the effects of past discrimination have had a huge impact on seniors.

Today’s seniors, who grew up before these social and legislative changes, have had different life experiences with regards to their gender identity and sexual orientation, says the report.

Our youngest seniors had turned 15 years old before homosexuality was decriminalized in 1969 – and some of our older seniors may have been imprisoned before this legal change.

As young people, many of our LGBT2Q+ seniors also risked emotional and physical hurt if they took the brave decision to come out, and even then, many never told their parents.

And despite decriminalization and the birth of the Pride movement, as young people our seniors faced public opposition and repression. Some were driven to contemplate suicide.

As a result, according to the report, “many LGBTQ people have grown older convinced that it is better to keep their sexual orientation or gender identity a secret to assure their wellbeing.”

The numbers—or lack thereof—speak for themselves. In 2014, 3% of Canadians aged 18 to 59 self-identified as lesbian, gay or bisexual. But there is no data for Canadians aged 65+.

“Among homosexual or bisexual seniors, for instance, this phenomenon—referred to as homonegativity—is associated with a negative image and the invisibility of homosexuality in society,” states the report.

All of which can lead to issues of abuse, neglect, and self-neglect of at-risk LGBT2Q+ adults.

The Lower Mainland LGBT2Q+ Community Response Network hopes to tackle these issues by bringing together a wide range of community and government groups across the region.

Meanwhile, the new network will cover the Metro Vancouver and Fraser Valley Regional Districts, as well as the Sea-to-Sky Corridor and the Sunshine Coast, where appropriate.

The new network will be holding a launch event at Surrey City Hall on Thursday, March 7, open to people of all cultures and backgrounds, to discuss reducing vulnerability of LGBT2Q+ seniors.

“Our queer community is at its best when we’re caring about and for one another, especially those who are most vulnerable and isolated,” says Fernyhough. “This launch is a tangible marker of that care and concern—and a message to at-risk LGBT2Q+ adults that you are not alone.”

If you are a senior in the LGBT2Q+ community, an ally, or if you work with seniors in the Lower Mainland, the network would particularly like to see you there.

Working together, the network hopes everyone can contribute to a province-wide movement to see a socially connected, equitable and safe future for queer and trans seniors. 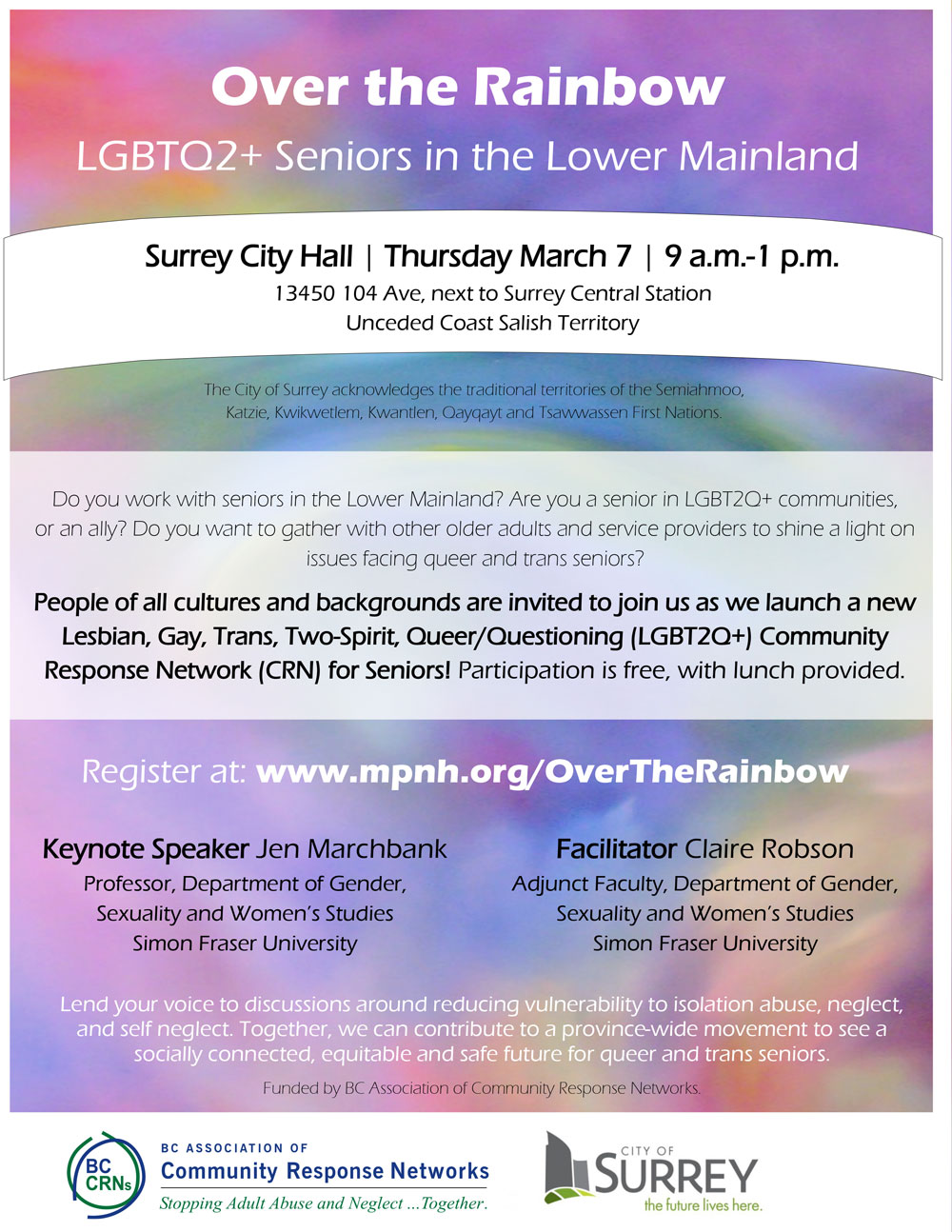