Tiny Mount Pleasant park was a labour of love 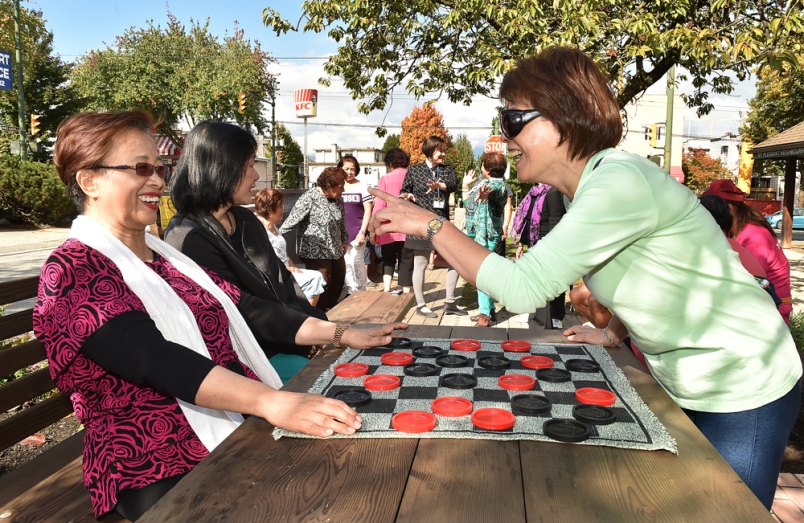 If the Mount Pleasant Neighbourhood House is the living room of the community, its new parklet is the front porch.

“This is a public space,” said Jocelyne Hamel, executive director at the house. “The neighbourhood really has a shortage of small public spaces.”

The tiny park, which takes up just two parking spaces worth of space on Prince Albert Street at Broadway, was just completed over the summer but was in the works for several years. It features benches, a chalkboard, a small garden and a table. Inside there is a collection of cards and games people can borrow.

“It was certainly a labour of love,” Hamel said.

Three years ago, the house approached the city and VIVA Vancouver about collaborating on a parklet. The city launched the parklet program as a pilot several years ago and there are currently 14 throughout the city. The first parklet was installed in 2011 on 14th Avenue and Main Street.

“It was actually a pilot initiative and the parklet was meant to be in place for six months,” said Jenniffer Sheel, branch manager of street activities at the City of Vancouver.

The one at Mount Pleasant Neighbourhood House is the first developed with a non-profit, all the rest have been sponsored by local businesses.

“It’s the first partnership where they’re owning and operating the parklet as a non-profit but we have had other partnerhips with non-profits with other aspects of building parklets,” Sheel said. “This is the first one that has spearheaded the application and has been leading it.”

The neighbourhood house worked with the community on the design of the space. Aside from its location, the parklet has another tie to the Mount Pleasant, Hamel said. The cedar used to construct most of the structure was salvaged from one of the buildings demolished to make way for the Rize development at Kingsway and Broadway.

While the structure is complete, Mount Pleasant Neighbourhood House has launched an online fundraiser to raise money to add some finishing touches — including custom armrests for the benches to help seniors sit and stand comfortably, indigenous plants for the garden, more games and a steady supply of chalk and brushes for budding artists, and a commemorative plaque.

For more information about the project or to make a donation visit www.mpnh.org/showyourlove

Show your Love!
Back the Parklet Project!